It’s one thing to get signed to a label, it’s another to get signed to one where so many bands you came up on spawned from. Ariel View talked to us about whether or not they were intimidated joining the Epitaph roster, their new album Until My Lungs Are Cleared, and local goals they all share in this back and forth with all four talents that make up this talented quartet.

Kendra: Harmonie and Heaven, you’ve said you’ve been writing songs since back in middle school. Did any of those, or perhaps part of those junior high lyrics, make it on the new record?

Harmonie: Most of them are pretty old. “Midnight” is probably the oldest, “Ecstasy” is up there too. I wrote “Gone” and “How Much Longer” when I was in high school.

Kendra: “Friday Nights” joins a long line of songs that came after a breakup. Do you feel as if every artist isn’t necessarily happy about heartbreak, but sort of appreciates the way it inspires them to spin the negative into art?

Harmonie: Without the heartbreak, I feel like a lot of great songs wouldn’t have been written.

Nadine: You’re not appreciative of heartbreak. In hindsight, you’re appreciative that something came out of it, but heartbreak as a source for your art is like a consolation prize.

Kendra: A lot of the new record deals with love and loss. Were these all inspired by the same person or was it a myriad of partners between the four of you that went into the album?

Nadine: It was a mix between a couple of people. When I joined I had just broken up with someone, we’ve all been through loss.

Harmonie: The songs are a mix of a lot of little relationships we’ve all had. 85% of our songs are mostly based on love and loss but the other 15% is just talking about friends and our experiences growing up.

Kendra: Another relationship song is “New York,” which is my personal favorite on the album. Are the lyrics true? Will the band head to NYC in the near future?

Harmonie: That song is actually kind of me making fun of what someone else said. My partner at the time was going to go to a faraway college and it was something they would say to just to sound cool. It wasn’t about me wanting to move to New York. We’d love to play in New York though.

Kendra: Let’s talk about the album dropping on Epitaph. With a roster that is full of some of the most influential bands in the rock/alt/pop-punk scene, were any of you intimidated when recording like, this album will sit on a shelf next to the likes records from Alkaline Trio, This Wild Life, and Bad Religion?

Harmonie: I don’t think I was intimidated. We were really lucky that we got to record with Joe Reinhart and then Brett Gurewitz, they made us feel comfortable in the studio. Sometimes I think like “oh shit we’re recording on a label with some of our favorite bands” and that makes me feel grateful. When we first got signed it was a huge deal but everyone’s been so supportive. It’s like a family.

Heaven: It’s been great knowing other bands on Epitaph support us like Joyce Manor started following us on Instagram and that was crazy. At first, it was intimidating but then you meet them and they’re all these nice people who like us and like our music.

Nadine: When we first went to the office, the first thing I saw was the Bring Me The Horizon gold record hanging on the wall and that’s the only time I felt kind of intimidated.

Kendra: You all came up in and around Ontario. I’m from Cabazon, so a little further east but essentially we were probably going to the same shows and heading to the same venues. This summer you got to play Bootleg, but are there any local spots you’re hoping to play when you head out and promote the new album that you went to as fans growing up?

Heaven: The main stage at the Observatory, we haven’t done that yet. When we played the Glass House and it was like a dream. When we were really little, we idolized the Smell, I still get nervous whenever I play there. We saw Joyce Manor sell out the Palladium and it was mind-blowing. I really want to play there.

Harmonie: It was like a dream to play the Smell, I was really nervous. This isn’t local and it’s not a venue but I’d love to play Coachella.

Kendra: On top of being from the 909/951 area, we’re all women of color and I know there were times when I felt uncomfortable going to shows because there weren’t many Black girls in the crowd, let alone on stage. Was it the same for any of you, and how do you feel repping the Latinx generation on stage now?

Harmonie: We’ve been pretty lucky that we haven’t had to deal with very much discrimination. Most of the people in our scene are people of color or white allies

Heaven: I feel like the only place it’s ever been weird was when we were on tour this summer and finally left California.

Miranda: We saw a guy in a MAGA hat doing bible study at a Starbucks in Oregon and we’re not used to that. There’s definitely more diversity down here and it was like experiencing culture shock. Or lack-of-culture shock.

Kendra: With the new album out October 18, what’s the plan for touring and getting out there to let the people hear it?

Nadine: We want to do everything. We have really good people on our team who we trust to help us get everything going. We’re just gonna do the damn thing. We’re going to take every opportunity that we can.

Ariel View’s Until My Lungs Are Cleared is out October 18, and they’ll be playing Bootleg Theater on October 17. You can get tickets here! 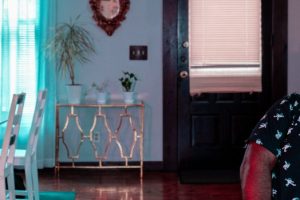 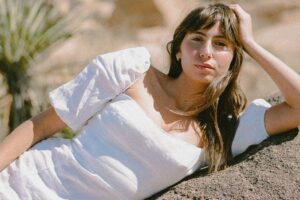