Music wasn’t something Kevin O’Connor found due to a parent or sibling instilled in him. It was just a passion that burned bright inside of him. So he ran with it playing in the band as a kid, composing as he got older, and eventually kickstarting Talkdemonic. We talked about his beginnings, his move east, and more like Talkdemonic’s October 28th release, ‘Various Seasides’ in this back-and-forth exchange. a

Kendra: Some people like music, those like myself who love it enough to base their life around it and enjoy concerts and whatnot, and then people like yourself who are deeply connected to it and sort of use it as a second language. Where did that stem from, or rather – what was your first music-centric love in life? A record, a song, an artist?

Talkdemonic: I’m really the only musician in my family, I don’t even know anyone else who

plays music that is related to me, so I guess I’m kind of a curveball. I was supposed to be a teacher. Actually, I was a substitute teacher at one point, selling CDs at school. I was completely obsessed with music in high school, a lot of different artists, and into the local music scene in Eastern Washington state. At the time in the early ‘90s, everything was blowing up just in our backyard of Seattle, and you could really feel the energy. Nirvana played at our local square dancing Hoedown Center. I missed that one but saw a lot of the other greats.

My first true love and the first record I ever bought was Sunny Day Real Estate’s ‘Pink’ album or LP2 from Sub Pop mail order. At the time I didn’t even own a turntable. Half of the band was originally from my hometown, so it felt like we were a part of it. They were doing an emotive kind of music that so many bands would copy in the late ‘90s and early ‘00s. The crazy thing is they are playing a reunion tour this month and coming to my local venue Brooklyn Steel. I will be

there, always feels good to come full circle! I have many musical loves, though they are always evolving.

Kendra: On top of being an artist, you’re also a well-versed film score maker. When you work on scoring a film or documentary do you approach that differently than when you’re creating for yourself?

Talkdemonic: My approach for scoring a film or documentary is always to help tell the story, or to prop up what’s happening on-screen with music. To serve the characters or the themes of the film. The goal is always to fulfill the wishes of the director, and to enhance the story with the music. Collaborating with filmmakers who trust your instincts always results in a better score. When you can truly be yourself melodically or stylistically. But every composer must get outside of their comfort zone to truly grow and to keep working. Even the best composers, have to constantly rewrite music cues and often get fired or removed from projects.

Having thick skin is pretty important. That your music isn’t too precious, that it’s all about the film. Writing music for myself is completely selfish and satisfying. No time limits. No instructions. Just pure expression. I can’t say that I prefer one over the other since it’s always such a joy to write music within the constraints of a film and to be challenged this way. But tracking for this new record was such a fulfilling experience.

Kendra: Speaking of doing your own thing, you played about several different instruments on your October 2022 release, ‘Various Seasides.’ I couldn’t even handle the flute in 3rd grade. Has picking up new instruments always been easy for you?

Talkdemonic: The flute, nice! My first instrument was the trumpet in middle school band. I love picking up a random instrument and then trying to record something with it. Even if you’re not an expert, you can still express yourself with it, sometimes even more spiritedly. I bought this small handmade vibraphone in Mexico City last fall. The notes aren’t in tune but the sound is beautiful. I used it all over a documentary score for textures and off-tune sounds, tracking it backward and forward to create a vibe.

When someone is learning a new instrument, they tend to do things that your classically trained players would never do. Break the rules. A new drummer can be the best kind of drummer, playing beats without major fills and approaching the set in a fresh unorthodox manner. I used to play rhythms on my bedroom door as a kid, didn’t start learning the drums until senior year of high school, and as an adult always have drum lines in my head and tend to nervously tap them daily. A curse for sure haha….

Kendra: What instrument would you say you have the biggest connection to?

Talkdemonic: The drums. As I mentioned, I always have a beat stuck in my head, for better or

worse. I’m most comfortable behind the kit, which comes most naturally to me in a live setting. I am however most connected to analog synthesizers. They’ve always fascinated and confused me. We’re living in a huge revival of synth culture, and there are more coming out today than in the ‘70s/’80s. There was a period where you could get analog synths for pretty cheap. I once bought a Crumar Orchestrator for $50 on eBay and picked it up from a hippie guy’s VW Bus front seat in Santa Cruz. That’s the one that Beach House has used a bunch on their records. We used to tour with it, so mine is pretty beat up, but it still makes beautiful sounds.

Kendra: You were in Portland and then packed up and headed to Brooklyn. Both are overflowing with artists and creativity but which city would you say gives as much back to the artists as it takes?

Talkdemonic: Even though people lump Portland and Brooklyn together they are just so vastly different. The scene in New York is no scene. There’s literally so much going on that everything kind of gets swallowed up in anonymity, which is something I enjoy about this place. You’re nobody on the streets, and seeing someone you know is an extra special treat.

Whereas in Portland, the community is so vibrant and you see friends and acquaintances almost wherever you go. I can’t really attest to the different music scenes in Brooklyn, as I’ve mostly been working as a composer in my own sealed room, but the art scene here is obviously unparalleled. The amount of incredible art at your fingertips is limitless, from the galleries in Chelsea to the numerous world-class museums all around the city. The whole city is really a living museum of diverse people from all over the world.

Kendra: That aside, what water-centric area of New York City would you say best fits the overall audible aesthetic of ‘Various Seasides’ and why?

Talkdemonic: Great question! We just shot a video for “Glass Tower” and ended up shooting on the East River at Gantry Park in Long Island City across from midtown. We also shot on the beach at Jacob Riis in the Rockaways.

One of the true joys of being a New Yorker for me is jumping on the A train and taking the ride out to the beach. The train literally takes you over an ocean inlet and island to cross over to the Rockaway land spit. It’s a beautiful awe-inspiring sight, seeing the skyscraper skyline in the distance beyond the water, the fisherman determined to catch something and the surfers queueing up for a day riding the warm Atlantic waves. I’ve spent three of my favorite birthdays at Beach 104-108 at Rockaway.

Without a doubt New York is a water city, it’s all around you.

In Greenpoint where I live, it’s a short walk to the waterfront of Williamsburg or quaint small Transmitter park near the ferry junction. The midtown views are inspiring, but Rockaway is where my heart lies. This album seems to be of the water, said a good friend I shared it with early, who is also a surfer in Oregon. “Playland” is about the short-lived Rockaway Hotel where I convened with new friends when I first moved here, friends that would become lifelong ones. This record is a love letter to NYC, a place where the highs are the highest and the lows are the lowest, but where humanity never ceases to impress and challenge.

Talkdemonic: My absolute favorite horror film is ‘The Shining.’ I can watch it over and over as

Kubrick is my favorite director. A few years back, I was staying at Timberline Lodge with a friend of mine. That’s the hotel on the side of Mt. Hood featured in the film, the outside that is. I was walking to get more firewood late at night as we decided to stay up late with the fireplace in our room. As I was walking into the lobby, I heard the twins telling “Danny to come play with them…” The lobby was eerily vacant and I legitimately thought this was some sort of mind trip when I noticed that they were playing the film all night on repeat in the game room adjacent to the front desk. Haha, it was a fright but pretty fun at the same time. I love campy horror movies like ‘Cabin in the Woods’ and ‘Tucker and Dale vs Evil.’ I saw ‘Bodies Bodies Bodies,’ and it hits like these hilarious slasher genre benders!

Kendra: Lastly, with ‘Various Seasides’ out on October 28th, what’s next on the agenda?

Talkdemonic: I’m lucky to have some scoring projects coming up soon. I’ve also started a graduate program at Queens College so I’m officially a student again. My goal is to release another Talkdemonic album in the next two years, so I’ve started thinking about what that will look like. I’m imagining a more electronic sort of record with a ton of percussion and maybe some more collaborators involved. We’ll see! 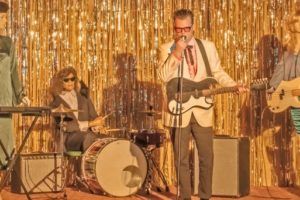 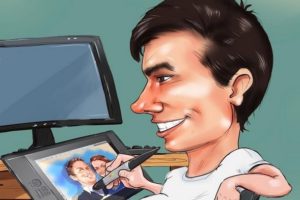 No vacation is complete without at least one caricature. Either[...] 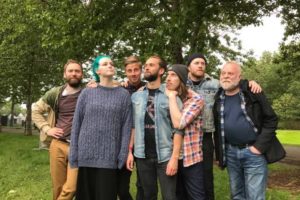