Music has always been the foundation on which Monica Aben has walked. A musical family is where her story and our conversation started, and along the way we touched on her retirement of sorts before 30, making her way back, being a simple kid from LA, and more in this back and forth exchange. One that drops right before her new EP, ‘Postcards,’ out October 15th.

Kendra: Coming from a musical family, did you realize your love of song and creativity early on?

Monica Aben: I absolutely did, I didn’t realize what I would make of it until I started playing guitar. The more I look back at family videos, I see I was always dancing around, singing, putting on shows for the neighbors, etc. But I’m really glad my parents just let everything unfold naturally. They encouraged me to try everything. I literally played every sport in middle school and was asked to leave four of those teams because my head was always elsewhere!

I think if my parents would’ve pushed music more seriously, I would have quit, but they knew that. So, when everyone was going to college, I asked them for the money to make an album instead. They were super supportive. I come from a family of “FOLLOW YOUR DREAMS!” I’m fortunate to have them as my cheer squad, especially on the down days in this career.

Kendra: Then after some not-so-great moments in the industry, you walked away at 26 and into a bit of a retirement. You wanted to focus more on the writing aspect. Who are some songwriters you’ve always admired?

Monica Aben: Yes! My two-and-a-half-month retirement, haha! Okay, my consistent top three over the years would be Brandi Carlile, Taylor Swift, and Gregory Alan Isakov. They are all incredible storytellers that really shaped me over the years, but Gregory Alan has written some of my favorite lyrics on planet earth. My two favorites off the top of my head:

“The Universe, she’s wounded/ she’s got bruises on her feet/ I sat down like I always did/ and tried to calm her down.” –The Universe

I’ve always been a lyric focused writer because those were the types of songs I was drawn to growing up.

Kendra: How do you feel your time focused solely on writing helped shape where you are today as an artist?

Monica Aben: It allowed me to create free from any interpretation of myself that I, my friends, or family had. I think that’s why I keep calling this a rebirth. It’s been such a fearless experience. If I’m being honest, I don’t care anymore – about what anyone thinks (most days haha!). The best I can do is be myself and write from the heart. I’m not afraid of failure, if you choose to do this as a career, failure is almost a weird haven. I’ve always been terrified of success.

Strange, I know, but at the end of the day I’m a writer first. I sing because I can’t imagine anyone else singing these songs. I try to write a song a week even if it sucks, because it’s my way to keep my feelings in check, and the writer in me, sharp.

Kendra: So yes, you’re back and it’s all thanks to a trip you took early last year when traveling was still normal. What moment during that trip to London flipped the switch in your head and made you think, okay – I’m ready to step back on stage?

Monica Aben: I’ve never been scared to be myself, I was just tired of being told to be like “everyone else” to exist in the industry, even though they just phrase it to not sound that way. When I went to London and met my now amazing manager, Umong, I remember being in a studio with him and his friend where we chatted about all things in life.

When they asked me who I wanted to be as an artist, I sat there in a neon pink vintage mohair sweater and said “THIS” pointing to myself, and the way they reacted was so nonchalant like, “Yeah okay that’s easy!” All in all, I think the UK / Europe embrace a more honest approach so that’s why I think I found my people there pretty quickly.

Kendra: Now you have your new EP, ‘Postcards,’ dropping this October! The EP title teamed with you being from such a tourist destination, I wanted to ask – if you had to compare the EP to a Venice Beach trinket at a souvenir shop, which would it be and why? Other than a postcard, of course.

Monica Aben: Before Venice became everything that it is today, there was this man that used to sell pyrography art (essentially burned wood). He would use a magnifying glass and with the sun, burn designs into wood. As a kid, I got two pieces, one of the Los Angeles skyline and one of the famous Venice sign where he inscribed at the bottom “Locals only” for me. I would say this EP is much like his art. It is comprised of two organic things, the sun and the wood and my EP is the product of emotional circumstances and specific places on this lovely planet.

Kendra: Now that we’ve paid homage to where you’re from, let’s talk about the one you wrote for your friends and fond memories and that’s, “Kids in LA.” This put me in my feels as I often get nostalgic for those moments from the past when my friends I grew up with were just – sort of clueless to what was to come, and free. How has the response been from your friends with this one?

Monica Aben: I love that it gave you feelings!! I’ve had a shocking amount of feedback from friends and family – how it made them reminisce and remember things they hadn’t thought of in YEARS.

As for my friends, I must preface this by saying that I am the friend with all the evidence. I’ve been obsessed with preserving memories as soon as I realized we could HAVE memories. So, in many ways, I think they expected me to do something like this eventually! No one disputed any of the footage because there’s an unspoken agreement that the Christmas Party footage of 2014 would never see the light of day…

With that being said, everyone was pretty emotional. Especially with this past year and a half and friends getting married and moving to different countries. I think we all feel really blessed to have survived our teens and early 20’s together…Even if I did bail on almost every single *party at Joe’s* because they NEVER went quite right.

Kendra: I also love the video. I’ve always been a fan of home videos, but also love the bedroom set you’re in. Inflatable furniture, an old school phone with a chord, the posters – loved it all! When it comes to all those amazing posters on the wall if you could go back in time and pen the soundtrack to any of them, which would you choose and why?

Monica Aben: Thank you!! I had a lot of fun using everything I’ve refused to get rid of over the years to build that set in my living room!

I think I would’ve loved to have written the soundtrack to “My Best Friend’s Wedding.’ I’m a sucker for those “I just realized I love you” movies! And the endless viewpoints or opinions. Honestly, it should’ve been a musical.

Kendra: Lastly, the EP is out October 15th, but what can we expect after that from you? Shows?

Monica Aben: I really hope so! I’m excited to make use of my vintage clothing collection and dance around and probably cry on stage in front of everyone, haha! Genuinely looking forward to it. My band is in London, but we’re working on a little something before this year ends…As for 2022, it looks like there may be some shows in Europe, but that’s all I say on that front for now! 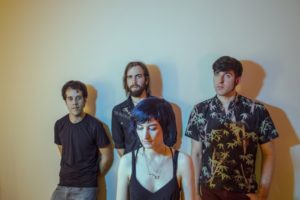 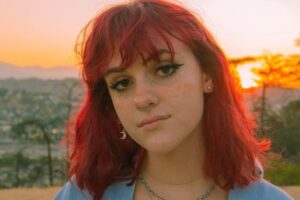 Photo Credit: Ally Wei If there is one thing that[...] 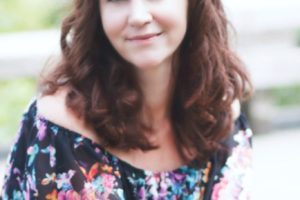 The Power Within Heather O’Neill

Photographer: Luz Rodriguez Like Domanique Grant, Heather O’Neill is another[...]