Louis Connell Williams was born in Columbus, GA, the 3rd child in an African American family, that defied every predetermined box that had been crafted for southern blacks coming out of the history of slavery. He bought his first home at 16 years old and followed Tuskegee Airman brother Edward James Williams to Washington, DC to attend Howard University. He graduated as a physicist and authored scientific papers and worked his way up through the Department of Defense and several other academic degrees.

Mr. Williams, as he required everyone to address him, lived an extraordinary life, traveling around the world, visiting communist Russian and generally treating the world as if it were his oyster. He passionately loved family and kept the traditions of his preceding generation in meeting every 2 years for almost 100 years. He is remembered at a bench beneath the red maple in Congressional Cemetery on the far side of the historic chapel. The engraving there says, “There is no greater gift than to love . . . and inherit eternal life to love again.”

Mr. Williams’ earthly tent remains in Columbus, Georgia at Prospect Church watching over his family until the time when all shall be restored . . . 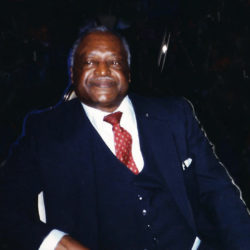