When a band comes with an annual celebration, you know you’re in for a good time. Every year The Y Axes celebrate their birthday by throwing their own Space Prom and their own Alexi Belchere went on to explain exactly why and what that is. She also opened up about living on Mars, the idea of dropping singles throughout the year and much more when she sat down with Zo.

Kendra: First off, by the time we read this you would’ve already had your Space Prom. For those who weren’t able to go – or have never heard of such a thing…what exactly goes down at a Space Prom?

Alexi Belchere: Space Prom is our band’s birthday, and it also falls in line with my birthday on July 15th, and Devin’s birthday on July 16th. Our first Space Prom was initially, and sort of still is, an excuse to get our friends to come out and see our band. Every year is a little different, sometimes featuring supporting bands and sometimes featuring karaoke, but always centering around a Space-themed, Prom-themed party. This year we had three bands, three DJs, an indoor bounce house, karaoke, and a photo booth. It was amazing and I’m so thankful for the venue owners at PianoFight for making this the best prom ever.

Kendra: Would you be down to ever perform at a high school prom?

Alexi: We’d love to perform at a high school prom! We’ve actually had a few chances to play at proms, since Devin and Nick are both high school teachers. It hasn’t yet come together, but it’ll be a great achievement for us when it finally happens.

Kendra: Perhaps that’s something to think about for next spring, but right now let’s talk more about your music. You guys were releasing four new singles this year. How has that experience been so far? Will you do it this way from now on, or possibly go the more traditional EP route next time around?

Alexi: Releasing singles one by one has been a good move for us. As a music fan, I love when bands put out something new, though something like a whole album can be a little overwhelming. It often takes me a year to really get into a new album. Though, Matt and Kim just put out that new EP that was like 15 minutes of pure joy and perfection. If we were to do the short spurt release again, I I’d like to put out a pair of songs every three or four months instead. Until then, we’ve got a full length album coming out in the fall!

Kendra: The accessibility of music today is a great, but do you ever wish you could be a band in another decade? If so, which decade and why?

Alexi: I wish we could have been around in the 80’s, touring with New Wave groups and wearing shoulder pads and epic haircuts. I could see Nick rocking a curly mullet. I’d love to hear our record spinning at a club next to some Cure or New Order.

Kendra: How close are you guys with the local scene up in San Francisco?

Alexi: Similar to the weather in San Francisco, the city has many microclimates of music. Through Devin’s involvement in the local music collective Balanced Breakfast, I’ve been introduced to some of the most passionate and talented musicians I’ve ever met. I always recommend Balanced Breakfast as a starting point for musicians who’ve just come to the city and don’t know anyone yet. As a writer for local blog Bay Bridged, Nick is also deeply routed in the San Francisco music scene. Similarly, Jack is involved with numerous projects and can be seen at tons of shows in the Mission night after night.

Kendra: Would you ever relocate, or will the Bay always be your homebase? I mean, because it’s pretty pricey up there to live.

Alexi: If I could move everything I love about San Francisco – basically take away the high rent and the steep hills and you have it– into another state, I would go in a heartbeat. There are plenty of amazing cities out there, and if I could trick my bandmates into coming with me, I’d love to see them.

Kendra: Back to the space idea. There is always more and more talk about putting people on Mars. After they get things settled with food and water, how long do you think it’d take before they started making music the norm there?

Alexi: There will probably be a thriving music scene once civilians start going up there. There won’t be much opportunity to go outside I imagine, so the most exciting indoor activities would likely be performing arts. Plus, space is so lonely, I’m sure emo will make a huge comeback!

Kendra: Lastly, what can we expect from you guys throughout the rest of the year?

Alexi: We’re planning the release of a full length album in the fall! It will have the four already released songs, and a bunch of new tracks. Be ready- while some of the new ones will be really fun to dance and clap along to, there are also a few songs that are much darker and heavier. We also have a new video in the works. 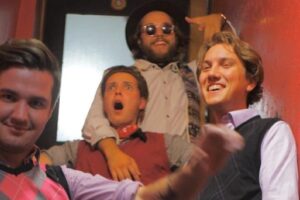 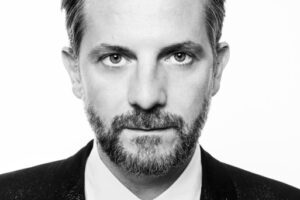 While some are still recovering from the holidays and the[...] 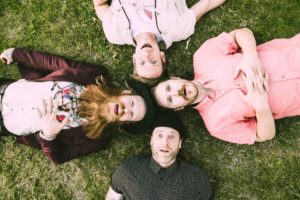