When you’ve done something well over a decade, no one is more surprised than you when your engine – and heart – start to sputter. We can fall into a funk, a depression even but can emerge the other end with a smile when we start to work on something that reignites our internal flame and makes us remember why we do what we do. That’s what happened right as (Leave) Nelson B was about to embark on making ‘2.0: Phantoms.’ Noted as the album that made him remember why he loved making music, his latest got him out of his funk and into a new headspace. One he shared with us as we talked the indie game, label reps, and more.

Kendra: Having been making music for the better part of a decade now, how do you feel the industry has shifted in that time for indie artists?

(Leave) Nelson B: When I first started making music, releasing it was not in the cards at all for me. I didn’t have a deal, management, representation, didn’t know how to play anything. It was through willpower that something got made. Now that I have started putting out music in public I feel that the industry, especially for those that are starting the indie way, have it made. Just how companies like Amazon have made it easy for any author to self-publish, streaming services and their progenitors have paved the way for the indie scene to flourish and the communication you can have directly with your customers and peers only enhances that. I love talking to my labelmates through Twitter or texts.

With that said you get less money doing what I do. No big label deal means less networking opportunity, no big music placements, no high budget videos, no backup dancers and no marketing machine. But you retain your integrity and by doing and getting these things done yourself, only empowers you for when you do get that phone call. The excitement that someone I do not know is listening to my music is never lost on me. This had been a dream for me for a long while and the shift in favor of indie artists has made it very possible for bedroom musicians like me to get to have that dream, minus the backup dancers of course.

Kendra: You’re an indie artist but you’re backed by the wonderful team over at Lonely Ghost Records. Do you feel being part of a label and having that extra support gives artists an extra boost in confidence?

(Leave) Nelson B: Most definitely. Lonely Ghost has been the reason why I still make stuff. I self-released “.5” and experienced that headache first hand, applying for copyrights, trademarks, publishing, et al. And it’s a very not-fun part about the business. They make that easier for me to just create, and have fun. And the community of artists that we have is simply amazing. From the label to my labelmates, Lonely Ghost is the absolute dream situation to be in, and has boosted my productivity and got me to invest in my workflow. I am way more confident now than I was pre-Lonely Ghost.

Kendra: Last year you dropped ‘The K-Kwik’ and you’re already back with ‘2.0: Phantom.’ Have you always been the type to finish one project and continue to the next?

(Leave) Nelson B: No, I usually take forever. I make things as I am learning my equipment and software and things I used before used to crash and break a lot. Not to mention whatever I may be going through in my life takes priority. But now I am much quicker to finish a project because I have learned so much in the last 15 years, from using a much less feature-packed version of my mixing software and throwing loosies on Myspace Music in the past, to being able to make times pretty much anywhere now.

Kendra: Also, with each record an artist drops – we get a look inside who they were at that time in their lives. In a year or two, when you listen back to ‘2.0: Phantoms,’ what significant aspect of who you were when recording it, what you were going through, or how you were feeling at the time that is going to come back to you and stand out as a vivid memory?

(Leave) Nelson B: I was just thinking about this in the year since I finished ‘K-Kwick’ which is marked by a dark depression and loneliness that was a direct result of my behavior, and a breakup that brought some things to an ugly head.

‘Phantom’ is a record that made me fall in love with making music again. I was going through therapy this past summer and the better the progress in therapy, the more music that I was working on.

The label released a Cure Tribute and that put the bug in my head to use one of the songs as source material, and that was during the beginning of my therapy and the first five or six drafts were horrible. They are on my Instagram to this day. Then ‘Princess Caroline’ by Superdestoyer came out and I knew I had to remake it and turn it into Vincent Adultman – being a fan of ‘Bojack Horseman’ myself – and that started my creative boom for this record that has yet to stop.

For the first time with this record, I challenged myself instead of taking the easy way out. And if I failed, I would just abandon the session and return to it later if it called to me. Failure didn’t mean the end of the world with ‘Phantom.’ I was becoming happier and loved waking up every day at the end of the making of this record as opposed to hating life and being jaded at the end of “K-Kwick”

Kendra: When it comes to making these tracks full of modern ambiance, where do you draw from usually? How does your mind work when in music mode?

(Leave) Nelson B: In my mind, the mixing, effects, and the silence are as much of an instrument as a piano or guitar. My workflow went through a major overhaul with this being my first sample-based record I’ve ever put out. So the “studio” is the instrument in this regard and my ear for the manipulated melody.

When I sit down to make someone m something like this, it’s the melody I am searching for and if it makes sense. Then I make it fill my palette.

Kendra: Lastly, what’s next for you as 2020 continues to unfold?

(Leave) Nelson B: More Leave Nelson B records for sure. I already got more projects being worked on. You never know. Lonely Ghost has a damn good lineup of artists I would love to collaborate with. 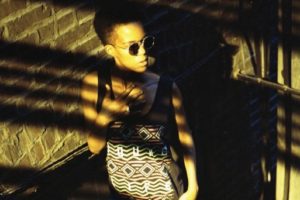 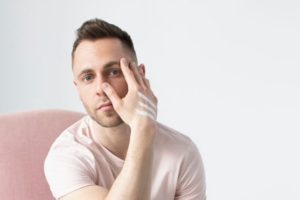 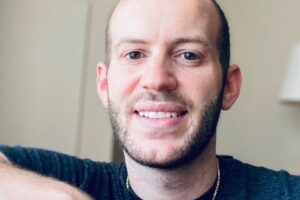